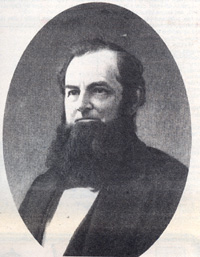 Alonzo Eratus Horton was born October 24, 1813, in Union, Connecticut, one of seven children of Eratus and Typhena Burleigh Horton. Both descended from old New England families. His brothers and sisters were Minerva, Emily, Ezra, Nelson, Thomas LaFayette and Lucy.

The family moved to New York State where Alonzo grew up. He was obliged to go to work while still very young to help support the family. He worked at many small odd jobs, was a clerk in a grocery store and then a sailor on the Great Lakes.

He stayed with his family until just before his twenty-first birthday, when he paid his father $50 for the release of his minority. He acquired a small schooner and engaged in transporting grain between Oswego, New York, and Canada.

For a short time he taught school in Ostwego. At the age of 21 he was elected Constable on the Wing ticket in Oswego. However, Horton was not considered very successful because he was unable to put poor people out of their homes. He held office only one term.

About that time, he developed a cough and it was thought he might have consumption. He was advised to go west. This came as a great shock not only to Horton but to his family and friends. He was thought to have been in fine health and was known as a champion boxer.

West to Horton in 1836 was Milwaukee. His shrewd and resourceful business acumen showed up there, where he traded in land and cattle. His past record seved him well.

A story was told that when Alonzo was eight years old he sold a pig for $1. By mistake, the man gave him $2. The next day Horton returned the $1. By coincidence, the two met again years later in Wisconsin, and the purchaser remembered the incident. He told a large group of citizens in Wisconsin. "I would trust Horton with everything I have in the world."

In 1841, at Jefferson, Wisconsin, Horton married Sally Millington Wright. She died of consumption in 1846. This is generally believed to be the first of three marriages. However two of Horton's nieces, Grace Bowers and Vine Bowers Hill, have been quoted as saying their uncle married five times.

George W. Marston, whose family knew Horton in Wisconsin, said Horton married a Miss Trusser of Ft. Atkinson, Wisconsin and that she was "a dressmaker and a very fine woman."

In 1847, at the close of the war with Mexico, Horton went to St. Louis and purchased land warrants from discharged soldiers. This way, he became owner of 1,500 acres of land in east central Wisconsin.

In 1848 Horton filed his first Warrant in Green Bay, the County seat for Brown County which the area was a part of at that time, for 160 acres of land which is now "Downtown Hortonville".

The price per acre at that time was $.70, yes seventy cents. Before he could file he had to take an oath that he had seen and inspected the land and that no other settler resided on the land.

No other white man lived anywhere near the area. Later that same year when laying out the plat for Lawrence University in Appleton, it was written that there were no white men living within four miles of the site selected for the college. The closest settler was a trading post at Kaukauna.

The task at hand would be impossible to comprehend at this current time. The land was almost entirely covered with dense woods and no trails. All travel in the area was by foot. First Horton had to come to the area, then look over the land, go to Green Bay and file then, return all by foot.

Not only were the woods in the area very dense, but the area also had countless streams and rivers, all without bridges and unknown fords. Every stream had to be crossed.

The first thing Horton did was to build a cabin and hire several crews to start a saw mill. He had one crew to build a dam on black Otter Creek, another to dig a mill race south of the creek, a third to fell trees and clear the site to build the mill and yet another to lay up a foundation for the mill.

On November 5, 1849, Horton laid out and registered his first plat for the Village of Hortonville. According to the San Diego Historical Society's 1979 publication, "The Story of New San Diego and of it's Founder Alonzo E. Horton", "Hortonville is a small town situated about twenty miles from Oshkosh and a few miles north of Lake Winnebago. Perhaps, had Horton remained there the "ville" would have been dropped and the city of Horton would have become an important metropolis."

A few years after founding Hortonville, Horton sold his interests and with $7,000 went to California for the first time. It was 1851 and the gold rush was on.

He worked in the mines, was an Adams Express rider, traded in gold dust and then opened a store at Pilot Hill.

Another business he developed was trading in ice. He went to the mountains in El Dorado County and cut ice then brought it back to the towns. He cut a total of 312 tons of ice, and from this venture made a profit of $8,000. By 1854 he was a wealthy man by the standards of the time.

In 1857 he decided to return home, and took a passage along the steamer Cortez for Panama. At that time, passengers for the East disembarked at Panama, crossed the Isthmus by land and took another ship on the other side for the rest of the journey.

A native riot broke out and while Horton took command of the resistance, he lost a bag filled with $10,000 worth of gold dust. However, he still had $5,000, which was in a belt around his waist.

Horton spent several years in the East. On June 25, 1860, at Jersey City, he married Sally Wilson Babe who shared his life, with its successes and failures, for the next thirty years. To him, she was always "Babe".

He returned to Wisconsin to visit family and friends for a short time. In 1862 he returned to San Francisco and opened a store at the corner of Sixth and Market Streets, where he sold furniture and household goods.

In 1867, at the age of fifty-four, he sold all of his merchandise and bought passage to a town called San Diego where he had learned that ports were being developed all along the West Coast including this area. At that time this area was considered worthless by many and the asking price for an acre of land was $.27 ½, or twenty-seven and a half cent per.

Along with a partner, Horton acquired 960 acres in 160 acre lots to the amusement of the citizens.

He was moderately well off, but not wealthy, and far from being a millionaire. He did have a practical vision and strength of character, and he was a superb salesman in the very best sense of the word. He had that rare quality of being able to imbue others with his enthusiasm and confidence.

The time and place were ripe for such a man. He had been a basket maker, lumberjack, grocer, cattle dealer, land speculator and at times a failure as well as successful. His death was reported in 1910.