The citizens of Hortonville celebrated July 4, 1854 when delegations from New London, Dale, Greenville and Ellington were present. Mr. And Mrs. Rudd furnished dinner to all who required it.

In that same year Mr. Leach raised 55 bushels of corn to an acre of land. He was a settler of less than four years, with stumps and roots covering fully one-third of his ground.

Nye got land in what is now the sounthern section of Hortonville; John T. Rose came in the fall of 1855, and Anton Stoinsky, Gottlieb Kraus and the Matz Brothers came, settling along the Plank road. The Stiegs also came about 1855.

Ther Waterman family came also about that time, the Knaacks settled on the Wolf River, and in addition to clearing a farm, established the first brickyard in Hortonia, probably the second in the county.

Cyrus H. Wire, John and Anthony Logand, and Edward Gowellcame and engaged in Lumbering and operated a mill.

In October, 1856, Hortonville boasted a flouring mill for custom work. This mill proved valuable to that portion of Outagamie County, and to the settlers and lumbermen up the Wolf River, making the village base of supplies.

The first roads in town were those made by settlers getting to their lands, who naturally made the easiest available routes. The first real road in the area was built from planks all the way to Appleton, from Hortonville. Reeder Smith was the man behind the early road, that later became the gravel highway.

The village, in 1856, on the plank road was 14 miles from Appleton, and two miles from the Wolf River. The soil was excellent. An excellent water power was utilized, and there was also established a large saw mill and flouring mill, a large hotel, two general stores, several mechanics, a neat school, and two hotels.

It was believed the village would grow.

Dr. Perry was a practicing resident physician in Hortonville in 1856. Later doctors were Bowen and Mills. Louis Jacquot came in 1856 doing carpentering and farming. Chauncey Carpenter arrived about 1856, and bought a quarter section of Julius Nordham, who lived in Waupaca County. Patrick Mulroy came to section 5, and Patrick Dacy to section 6.

In 1857, Briggs and Sanborn completed a new mill to which they added steam power. Sylvester S. Witman came the next year and purchased the lumbering, and making matches. He ran it until the days of usefulness were over.

In January, 1859, the religious congregations were presided over by Revs. Mitchell and Peterson. The first church was built that year, although the churches were organized as early as 1854, the preacher was Andrew Cornish.

Daniel Huntley had a school. A Lodge of Good Templars was instituted in the village by District Deputy J. F. Johnston.

By the year 1862, Hortonville had four stores, eight stops, two taverns, a neat church, and another nearly built, a large steam saw mill, and a population of several hundred.

In June of that year, the steam saw mill at Hortonville, and the planning mill of S. F. Hardacker were destroyed by fire. The steam mill was owned by Briggs & Culbertson. There was no insurance and the loss was heavy.

Herman T. Buck, an early settler in Dale, moved to Hortonville in 1870, where he was engaged in the mercantile business. His brother Charles, later became his partner. This business originally started with Moses Allen being the first real storekeeper in Hortonville. He was succeeded by Woodworth and later by Grant.

In 1873, the Milwaukee, Lake Shore & Western Company built the first railroad through the village. The line was purchased by the C&NW railroad about 12 years later.

For many years there was agitation in the village for incorporation, but it was not until 1894 that the locality reached required population of 360 persons per square mile.

On October 27 the incorporation was achieved with Louis Jacquot elected the first village president.

The following year, 1895, the Bank of Hortonville was incorporated. Today it is a branch of Appleton State Bank.

With the new century came new manufacturing and business embelishments. In about 1912 the Hortonville Rural Fire department was organized and became nationally known.

This fire department developed a method of cooperation with affiliated members in the surrounding area that is used today as a model in rural districts throughout the nation.

Today some of these are still in business. Some have changed hands. Others have sprouted up, including the Wire Products company; Melray, Incorporated; Larson company, Hortonville Lumber; Schnieder Feed and service; Hortonville Truck Body Shop; Allied Manufacturing company.

From this small community around one saw mill, Hortonville has grown beyond belief of the pioneers. 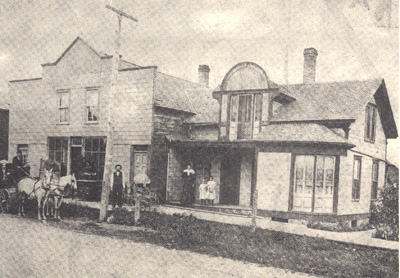 This picture, taken in 1895, shows the funeral and undertaker parlour owned by Gred Malduirn on east Main Street.