Late in the summer he returned with a force of men, and the first thing he did when he came to his land, then a part of Brown county, was to build a dam across the creek, also digging a race.

His saw mill went up next, on the present site of the Joseph Klein residence, and the first wood was sawed on August 3, 1849.

In November of that year, the village plat was laid out around this saw mill. To encourage settlement. Horton gave away much of the land, and offered lumber from his mill at half price to build homes. Soon the land was cleared and settlement began, so he named the place Hortonville. 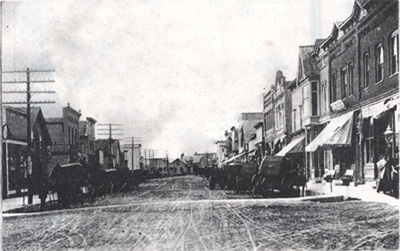 The first industry, hotel, school, churches and even the earliest roads centered in the little settlement on Black Otter Creek.

Horton only stayed in his settlement until 1850, when he caught the gold fever and headed for the west. It was there in the late 1860's that he founded San Diego, California.
When he left for the west, Horton sold his land for $15 an acre. (His death was reported in 1910).

Few of the men engaged in building the saw mill remained to become actual settlers. Captain Joel Tillison was one to remain, and he became the pioneer lime burner in the town, around 1853. Later LeFevre began burning at a kiln on the County line.

The village prospered and Norman Nash became the first village postmaster. He also owned a large amount of land at Hortonville, which he deeded to the city shortly before his death in 1888 for use as a cemetery and fair ground. The latter is now Commercial Club Park.

Cyrus Weir and the Irish McComb brothers, Matthew and Ira, arrived the same year that Nash did, 1849. Weir was the first storekeeper of the village, and his store was located on the corner of Mill and Bath Streets.

Matthew McComb brought his bride to Hortonia on July 2, 1849, in company with Hugh Leslie and Family.

Leslie and McComb bought land a month previously, but when coming to settle, they became confused, and located on land belonging to Simoen A. Shepard thinking it was their tract. Here they lived for four weeks, in the open, until shanties were built, and the first lumbered sawed.

The McCombs came directly from Ireland and the story goes that Matthew built a crude shanty that had at first only blue sky for a roof. He purchased the first lumber sawed at Horton's mill, and used it to roof his home.

Supposedly the first marriage was between John A. Hewitt and Susan A Sheldon, performed by John Easten, justice of peace, at the McComb cabin at the mouth of the Wolf River.

Obidiah A. Blackwood arrived in time to help start and finish the saw mill, and being an experienced lumberman, he engaged with Horton and successors for about eight years, sawing lumber and rafting it to Mississippi, and cleared it living not too far from where the depot now stands. Later he moved new New London, in Hortonia, where he cleared another farm.

Alvin Orvens, who came November 20, 1849, lived newr the depot, but about 13 years later sold out, and moved to Michigan. Henry J. Whicher became a settler early in the spring of 1849. That summer he built a hotel, which was called the Pinery House, the first in the town. He too, was transient, and soon afterwards sold to Burton, from which it passed to Hampsen.

Luther Morton came June 1, 1849, and began clearing land, but he too, sold, and passed on. James McMurdo came at the same time, and remained only a short while, before settling in Ellington.

Mason C. Hulbert came in August, and became a storekeeper. Goods, which were brought from New York, occupied the lower room, while the room above was home to many settler's families, while their own cabins were being erected. Hulbert sold to Briggs, Pelton and Co.

David Briggs, Platt Rudd, Byron Pelton and George Merrill became identified with the town on June 27, 1850, when they purchased the stock and store building of Hulbert. The first town meeting was held at this store on the first Tuesday in April, 1850. The total number of votes was 17.

Thomas Ogden and Julius Nordman came. Thomas Easton arrived and built a hotel on Nash Street at a point near the Arlington libery barn. The first birth was that of a daughter to Thomas and Lucinda in March, 1850.

Norman Nash arrived, and built a hotel which was called the Hortonia House. He had it finished and ready for the accommodations of travelers by August 1, 1850. The first death recorded was Sara A. Nash on April 22, 1850. Some time later Platt Hudd secured the hotel and operated it for several years. Lucinda Collar later had a tavern there.

With the nucleus of settlers within a few years, and the generosity of Horton, the village thrived from the beginning. A crude school and the first church - Baptist in denomination- were built before 1850. The first blacksmith shop was built in 1849, the first flouring mill that same year, andthe first barrel of whiskey was retailed by Captain Casper Tillison.

Oliver Poole and family came in February, 1850. Aunt Sally Poole was the home doctor for the settlement, ministering not only physical, but also spiritual ills, in sickness a nurse, and in the house of sorrow, a consoler and comforter. She was also a midwife.

An early cemetery was on the farm of Oliver Poole.

In April, 1854, the house of Oliver Poole at Hortonville, was destroyed by fire, and the neighbors built him a new one.

Moses Allen came in 1850 and purchased Briggs, Pelton and company, consisting of the stock installed by Hulbert, comprised of notions, groceries, some blue calico and denim, and a little red flannel. Part of his time was occupied at the saw mill, where he made spindles and rounds for chairs.

Matthias Klein and Andrew Cornish became settlers, and are identified with the early progress of the village. Cornish, who came in 1849, kept a store, which he left to preach the gospel, and moved to town.

Ira Hershey came in 1850, and lived in Hortonville until 1872, when he moved to Kansas, He was a miller by trade. Isaac Leach and sons Eli, Ell and Alden became settlers that same year, and with them came Joseph Clark. The first school house was built the summer the first teacher was Emma B. Leach.

Joseph Clark built a house, and then moved to Green Bay. He procured the first mill stones brought to town. They were installed in a shanty near the saw mill, and used for grinding corn. Ira Hershey operated the mill.

Lenard Steffen came in 1851 and bought a farm west of Hortonville. John and James McMurdo came from Scotland that year to become leaders in the community. John served the village a postmaster for ten years. He followed the trade of millwright among others erecting the flouring mill of Briggs & Sandborn. Augustin C. Briggs came in the fall of the same year. In 1856 he built a fine hotel, which lasted for 60 years.

John Foy come about 1851 - Mr. Bosworth platted an addition to New London, coming about this time - George Tiplear settled in June, 1852. He was a blacksmith and established his shop on Main Street.

Elder William Mitchell, a Baptist minister, settled on a fram, clearing his land and holding religious services in the school house at Hortonia, and other points in the settlements of Ellington, Greenville and Dale. At the organization of the church in Hortonville he became their pastor.

In 1852, William W. Briggs, a lumberman, came from Maine, and went into the lumbering business when he arrived at Hortonville. It took $50 to start house-keeping and his remaining $100 went into his business, when along with David Briggs and H. B. Sanborn, they secured the unsold portion of the village plat, and the saw mills.

Briggs, whith Ira Hersey and Sanborn built the first grist mill at Hortonville, thus adding to the comfort and welfare of the settlers.